The History Department is slowly transitioning to meet the newly adopted 2018 Massachusetts Frameworks for History and Social Science. For the 2018-2019 school year, grade 8 will change to the new frameworks with other grades to be included over the next two years.

At the preschool and kindergarten level, learning in history and social science is built on children’s experiences in their families, school, community, state, and country. Children listen to stories about the people and events we celebrate in our national holidays and learn why we celebrate them. They also become familiar with our national symbols. The purpose of the preK-K curriculum is to begin the development of their civic identity.

At the preschool and kindergarten level, learning in history and social science is built on children’s experiences in their families, school, community, state, and country. Children listen to stories about the people and events we celebrate in our national holidays and learn why we celebrate them. They also become familiar with our national symbols. The purpose of the preK-K curriculum is to begin the development of their civic identity.

In first grade, children listen to and read folk tales and true stories from America and from around the world. They learn about major historical events, figures, and symbols related to the United States of America and its national holidays and why they are important to Americans. The grade 1 curriculum continues to strengthen children’s identity as American citizens.

Second graders learn world and United States history, geography, economics, and government by studying more about who Americans are and where they came from. They explore their own family’s history and learn about distinctive achievements, customs, events, places, or landmarks from long ago and from around the world. The chief purpose of the grade 2 curriculum is to help students understand that American citizenship embraces all kinds of people, regardless of race, ethnicity, gender, religion, and national origin. American students come from all countries and continents in the world. A history and social science curriculum should help students acquire a common understanding of American history, its political principles, and its system of government in order to prepare them for responsible participation in our schools and civic life.

Drawing on information from local historic sites, historical societies, and museums, third graders learn about the history of Massachusetts from the time of the arrival of the Pilgrims. They also learn the history of their own cities and towns and about famous people and events in Massachusetts’ history.

In grade 4, students study the geography and people of the United States today. Students learn geography by addressing standards that emphasize political and physical geography and embed five major concepts: location, place, human interaction with the environment, movement, and regions. In addition, they learn about the geography and people of contemporary Mexico and Canada. Teachers may choose to teach the standards on the geography and social characteristics of the nations in Central America and the Caribbean Islands. Teachers may also choose to have students study in the first half of the school year one early civilization. We recommend China because it is not taught in grade 7 and can be easily connected to the English language arts curriculum through its myths, legends, and folktales.

Students study the major pre-Columbian civilizations in the New World; the 15th and 16th century European explorations around the world, in the western hemisphere, and in North America in particular; the earliest settlements in North America; and the political, economic, and social development of the English colonies in the 17th and 18th centuries. They also study the early development of democratic institutions and ideas, including the ideas and events that led to the independence of the original 13 colonies and the formation of a national government under the U.S. Constitution. The purpose of the grade 5 curriculum is to give students their first concentrated study of the formative years of U.S. history.

Sixth graders systematically study the world outside of the United States and North America by addressing standards that emphasize political and physical geography and embed five major concepts: location, place, human interaction with the environment, movement, and regions. Students systematically learn geography around the world continent by continent, similar to the way in which atlases are organized. They also learn about each continent in an order that reflects, first, the early development of the river valley civilizations and then the later development of maritime civilizations in the Mediterranean area and in Northern and Western Europe. In so doing, students are better prepared for the study of early civilizations around the Mediterranean area in grade 7.

Seventh graders study the origins of human beings in Africa and the ancient and classical civilizations that flourished in the Mediterranean area. They study the religions, governments, trade, philosophies, and art of these civilizations, as well as the powerful ideas that arose in the ancient world and profoundly shaped the course of world history.

In World History II, students study the rise of the nation state in Europe and the economic and political roots of the modern world, including the Industrial Revolution, 19th century political reform in Western Europe, and European imperialism in Africa, Asia, and South America. They also examine the causes and consequences of the great military and economic events of the past century, including World War I, the Great Depression, World War II, the Cold War, the Russian and Chinese revolutions, the rise of nationalism, and the continuing persistence of political, ethnic, and religious conflict in many parts of the world.

In U.S. History I, students examine the historical and intellectual origins of the United States during the Revolutionary and Constitutional eras. Students study the basic framework of American democracy and the basic concepts of America government, as well as America’s westward expansion, the establishment of political parties, economic and social change, sectional conflict, the Civil War, and Reconstruction.

In U.S. History II, students analyze the causes and consequences of the Industrial Revolution and America’s growing role in international relations. Students study the goals and accomplishments of the Progressive movement and the New Deal. Students also learn about the various factors that led to America’s entry into World War I and World War II as well as the consequences of World War II for American life. Finally, students study the causes and course of the Cold War, important economic and political changes during the Cold War, such as the Civil Rights movement, and recent events and trends that have shaped modern-day America.

88%
of graduating seniors enroll in college 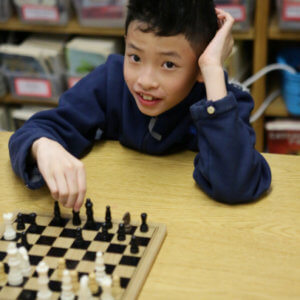